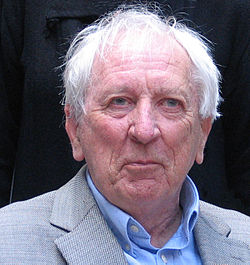 Well, at least neither Bob Dylan nor Philip Roth got it. It is definitely the turn of a poet to get it but I suspect that Tomas Tranströmer will not turn out to be a big seller. I must confess that I read very little poetry and almost none in translation so I doubt that I will read any Tranströmer. Fortunately, there is enough of his poetry in translation for those that do not read Swedish to read him. And good luck to him and thanks for sparing us from Dylan and Roth.

As this is my first post on this blog, my aim was to talk a bit about my new website The Modern Novel but that will have to wait till another day as tomorrow is Nobel Prize for Literature day. I generally avoid literary prizes as I think that their decisions are often wrong but I cannot avoid getting caught up in the hype of the Nobel Prize and the Man Booker Prize, even though I tend to think many of their decision are really wrong. However, however silly they may be, commentators seem to be even sillier. Cases in point:

1. Someone called Michael Bourne, who writes for a site called The Millions, produced a very silly blog post in the form of an open letter to the Swedish Academy, suggesting Philip Roth get the prize. I can think of hundreds, yes hundreds of writers more deserving than Roth. I can think of many US nationals more deserving than Roth (Oates, Pynchon, DeLillo, Coover, Cormac McCarthy, Vollmann and, yes, Bob Dylan – see 2. below). I wonder if Bourne has read many non-US writers. In particular, I wonder if he has read any who write in a language other than English, in the original language. My guess is no. (My apologies in advance if I am wrong.) We all know that the USA is very US-centric but come on, Mike, as a reader, you should be aware that there is a world beyond Brooklyn and a world where not everyone speaks English. Pop downtown and you are likely to hear Russian, Spanish, Yiddish, Italian, Polish, German and many other languages spoken. Yes, Mike, people write in these languages, too, and some very good stuff. Nobel Prize winning stuff. So let’s bury the Roth campaign once and for all. He is not all that good. He does not deserve it. How’s about Goytisolo, Murakami, Farah, Nooteboom, Kadare, Handke, Butor, Ireland, Tabucchi, Tournier?
2. According to Ladbroke’s, Bob Dylan is now favourite. Oh dear, I hope this is a joke. I love Bob Dylan. He is perhaps my favourite musician. I love his lyrics. They are brilliant. But Nobel Prize? I don’t think so. But rather Bobby Z than Roth.
3. I am deliberately writing this before the announcement. Whoever wins, I won’t have guessed it, as I never do and, I suspect, many others will be wrong.