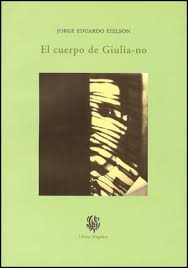 The latest addition to my website is Jorge Eduardo Eielson‘s El cuerpo de Giulia-no [The Body of Julia-n]. Eielson was best known as an artist and poet and this clearly shows in this book. Though there is a sort of a plot – how the narrator grew up on a farm, did not like it, except for the exotic birds, and then turns up in Italy. More particularly, we are concerned with his somewhat ambiguous relationship with the ethereal Giulia, a model (according to the narrator) or a prostitute (according to the Venice police) whose body, at the beginning of the book, has been hauled out of a canal, apparently having committed suicide. We also follow the Giulia/Giuliano dichotomy. Giuliano is a man the narrator knew as a child (and even had a brief homosexual relationship with) but who is now a rich, fat and vulgar playboy. Clearly Giulia is the antithesis of Giuliano. However, as an artist, Eielson is just as much concerned with painting a picture for us – of the seamy side of Lima, of an Irish prostitute, of the exotic birds and of Giulia’s white body on the white slab of marble of the morgue. The book is long since out of print in Spanish and is highly unlikely ever to appear in English but if you can read Spanish and can find it, it is an enjoyable little gem – as long you are not expecting plot and character development.