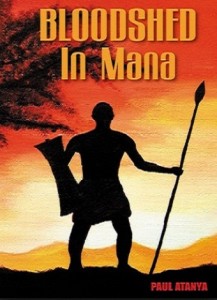 The latest addition to my website is Paul Atanya‘s Bloodshed in Mana, the first novel from South Sudan on my website. The novel follows a traditional African theme, that of the coming of the white man to violently replace an idyllic African culture, though with a slight twist. The culture is that of the Mana people who are a warrior people, with wealth measured in number of cows they own. Lojore has recently been born to Namala and is a sort of Christ-like figure, as his father and maternal grandfather are both great warriors and he is seen as the hope of his people. When the neighbouring tribe, whom they have always managed to control without difficulty, get guns from the redmen (i.e. the white men, so called because of their sunburnt faces), the Mana know that they are in trouble and retreat from their traditional land of milk and honey to the hinterland. As Lojore grows, we see that he does not want to become a warrior leader and when one of the tribe is sent into exile for having killed another warrior in a fight, he is disillusioned and goes off with his cousin to study the white man’s ways, realising that they are the way of the future. Naturally, this does not go down well with his father but even the great Lomoi must accept that this change is inevitable. Atanya tells his tale well, even if his style is occasionally a bit stilted and it is nice to see that novels are starting to come out of South Sudan, even if Atanya does live in Canada.