END_OF_DOCUMENT_TOKEN_TO_BE_REPLACED

I have just posted to my website the first Kurdish novel I have read. Its title, which translates as Sufferings of the People explains the title of this post. Sadly, it is not available in English but only French. I own three other Kurdish novels but, again, they are not available in English, only in German. Kurdistan is one of the several nationalities on my website which is not a sovereign state. In 1976, Wildwood House published Michael Zwerin’s A Case for the Balkanization of Practically Everyone. Zwerin was primarily known as a jazz critic and musician but he did write this one interesting book, long since out of print and, I suspect, little known. It basically makes the case for small nations and that is something I am very much in favour of, hence my support of them on my site. There is a good example of such a nation in Thomas Mann’s Königliche Hoheit (Royal Highness), maybe my favourite nation in literature. The Kurds are one such nation who seemed to have lost out in the post-Soviet Union, post-Saddam Hussein, post-Arab Spring world. There are actually thousands of such nations. While the Jews, Poles and Ukrainians may have been the main victims of the Holocaust, peoples such as the Sorbians and Ruthenians (now Rusyns) pretty well got wiped out.

The Kurds in Iraq now have some sort of regional autonomy, though the Kurds are also in Iran, Syria and Turkey, and there is not much chance of those countries giving up territory to form a Kurdistan nation. All of which brings me onto Christopher Hitchens. Hitchens died earlier this week. This is not the place to praise or condemn him. Others have done both far better than I could. However, one thing I would mention is Hitchens’ support of George Bush and Tony Blair’s dirty little war in Iraq. Hitchens supported the war, one of the many reasons he has been condemned, including by me. One of his reasons, however, was his support of the Kurds. He famously had his photo taken with a group of Kurdish fighters (see below). 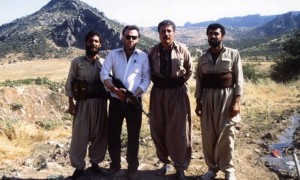 His support for the Kurds was universally praised , not least because, as sadly so often happens, the new bosses were not a whole lot better than the old bosses. We can argue to death whether it is better to be oppressed by your own kind or colonisers though, obviously, it is better not to be oppressed at all. Hitchens argued that the Kurds did obtain an improvement in their lot after the fall of Saddam Hussein. I am not competent to judge but I will accept that. Sadly, till they obtain full independence with a proper democratic elections, they will still have a lot to fight for. Ahmad’s book shows that the Kurds, like other smaller nations, have suffered a lot. Let’s hope that balkanisation and democratic independence comes their way soon.

I frankly find end of the year lists of best books a little tiresome. Firstly, all too often, authors plug the books of their friends, other authors with the same publisher/agent or authors who plug their books. UK satirical mag Private Eye is good at poking fun at these. Secondly, many of them seem to cheer the same book. How many times do we need to be told that A Sense of Ending is the best book? Then you get the author/critic who says that the only essential book is some totally obscure book of Slovenian poetry (only available in Slovenian) which no-one has heard of, even in Slovenia, let alone in the English-speaking world. Yes, we know you are a genius. Finally, and most pertinent for me, most of the books I read in any year were not published in that year. I notice, from my website, that I seem to have read thirteen books published this year, all but one originally written in English. This is probably a record high for me.

Having said all that, of course, I do enjoy a sneak look at what the authors and other pundits are recommending, partially to agree, partially to sneer. I like the idea of combined lists. Fimoculous used to do lists of lists and not just for books but apparently has had enough. This year, the novelist Ivan Thays, in his wonderful blog Moleskine, gives a list of lists, mostly taken, as he states, from that other wonderful blog The Literary Saloon. It is an interesting bunch, though I have come across a few other interesting ones, which I looked at but did not note. Maybe I will try such a compilation next year. But then maybe I won’t. The sad thing is that, this year, as far as I can tell, there has not been any great novel published, though there may have been one we failed to notice and only become aware of in a year or two. Which is why I tend to ignore best of lists. As for the books on the lists, I have found that new books by the tried and tested authors have been sadly lacking. But I have probably not yet read the worthwhile ones and won’t do so for a few years.

Christa Wolf died yesterday.  You can find links to obituaries in both English and German on the Christa Wolf page on my website. She came in for a lot of criticism, firstly because it was discovered that she had worked as a Stasi informer and secondly because she had opposed German reunification. However, it is too easy to sit comfortably in the West (and, yes I do mean both the general political sense of the West, as well as West Germany) and criticise her. Let us not forget, as a teenager, her family fled the advancing Soviet army (she was born in what was then Germany but is now Poland). Moreover, though she did work for the Stasi, she soon withdrew. According to this article (in German), she prepared just three reports, all of them generally positive. The Stasi, not unsurprisingly, criticised her reporting for Zurückhaltung und überbetonte Vorsicht (restraint and excessive caution). Thereafter, she herself was under surveillance. As for her opposition to reunification, shared by other writers, she (and the others) felt that there should be a true social democracy in Germany and West Germany certainly was not it (nor, of course, was East Germany). She hoped, probably very naively, that East Germany, after the fall of Communism, could become a true social democracy. It is highly doubtful whether this could ever have happened but there is no doubt that her fear of capitalism and its consequences seem to have been borne out in recent months.

There continues to be criticism of Wolf and, as she is reassessed after her death, there will undoubtedly be more. I would argue that it is not really justified and that she should be remembered for writing three first-class novels – Der geteilte Himmel (Divided Heaven), Nachdenken über Christa T. (The Quest for Christa T)and Kassandra (Cassandra), all of which have been translated into English.