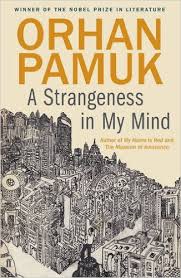 The latest addition to my website is Orhan Pamuk‘s Kafamda bir tuhaflik (A Strangeness in My Mind). This is Pamuk’s labour of love, a hymn to his city (Istanbul), particularly as seen by the ordinary people. The main character is Mevlut Karataş, a yoghurt and boza seller, though he has many other professions – a waiter, an ice-cream seller, selling rice, chicken and chickpeas, a parking lot attendant, a restaurant manager and electricity meter reader. Mevlut comes from an Anatolian village when he is a boy to help his father sell yoghurt and boza, as well as to go to school. He is an honest, decent man, who struggles to make a living at various jobs. He elopes with a woman but, when he finally sees her, realises he has eloped with the wrong woman, the sister of the woman he really loved. He makes no complaint and marries the woman and remains a good husband and good father to their two daughters. But the main theme of this novel is how Istanbul is changing, from mass immigration from Anatolia to the rise of a moneyed middle class, with neighbourhoods rising up and others destroyed by new roads and buildings. Mevlut somehow struggles through all of these changes, barely noticing them till they have an effect on him. This is a beautifully written book and a tribute to his city but it does not have that post-modernist touch that some of his earlier works have so I do not think it will number among his greatest works. 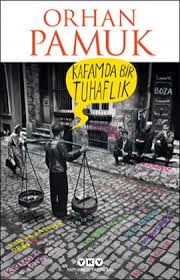 I was fortunate enough to go a book signing for this book and so met Pamuk. I took the opportunity of asking him whether his first novel, Cevdet Bey ve Oğullari [Cevdet Bey and His Sons], was going to be published in English. (It has been published in French, German, Spanish, Italian, Arabic, Bosnian, Chinese, Dutch, Greek, Polish, Russian and Serbian.) I have read it and thought it a fine book. It turns out that it has been translated into English but it has not yet been published in English. The reason for this is that the publishers have recently (2012) published another earlier novel of his, Sessiz ev (Silent House), and did no want another earlier novel published without publishing a recent one. No, I did not really understand this reasoning and nor did he. Anyway, Cevdet Bey ve Oğullari [Cevdet Bey and His Sons] will be published in English but we not know when.