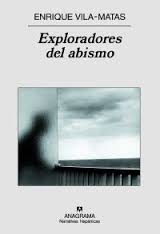 The latest addition to my website is Enrique Vila-Matas‘ Exploradores del abismo [Explorers of the Abyss]. This book is not a novel but, rather, a collection of linked short stories, about what Vila-Matas calls exploring the abyss, though his ideas of what is exploring the abyss may not be shared by everyone. Only one of the stories follows his usual path of literary wanderings and that is the only story in the collection to have been translated into English, under the title Because She Never Asked. This story uses a couple of ideas found in other of the stories in this collection, namely the idea of the doppelgänger and also having a story told which seems like the main story but which we later found is narrated by another character, who has been affected by this story or is involved with it somehow. Inevitably it uses both real writers and fictitious ones and goes off on tangents. The other stories tend to have far fewer literary references and several of them are dark. The theme of emptiness, the new physics and even medical difficulties are all found in several of the stories. Apart from the Forest-Meyer family, who appear in various forms in several of the stories, there are no characters that recur. While not, in my view, as rewarding of some of his other works, it is still interesting to see Vila-Matas try something a bit different from his other work but Because She Never Asked remains my favourite.