The latest addition to my website is Almudena Grandes‘ Las edades de Lulú (The Ages of Lulu). This is undoubtedly the most erotic/[pornographic novel I have ever read. Our eponymous heroine, Lulu, the seventh of nine children is essentially neglected by her parents and looks for love in all the wrong places, the wrong places being unlimited and hugely varied sex, prompted by a romp with her brother’s best friend, who is twelve years her senior and who, when she is fifteen, essentially sexually assaults her, albeit with her not unwilling consent. They will maintain a highly colourful and varied sexual relationship and have a daughter, till she moves away from him, and finds sex elsewhere, including on her own. It made a list of the 100 best novels in Spanish of the 21st century but did not really work for me.

The latest addition to my website is Javier Cercas‘ El monarca de las sombras (Lord of All Dead). This is another non-fiction novel from Cercas, as he sets out to find the true story about his great-uncle, Manuel Mena, who fought for the wrong side, i.e. Franco, in the Spanish Civil War. Most of those involved are dead, Mena himself having been killed at the Battle of the Ebro, aged nineteen. He investigates Mena’s story and finds missing element and inaccurate information but he also looks into the motives of people like Mena and others who supported Franco against what Cercas considers their own interests and investigates these and other issues such as honour and glory as well as the idea that history is often more complicated than it seems at first glance. It is another first-class work from Cercas.

The latest addition to my website is Roberto Bolaño‘s and A G Porta‘s Consejos de un discípulo de Morrison a un fanático de Joyce [Advice from a Disciple of Morrison and a Fan of Joyce]. This novel was written before both writers were famous and tells the story of a Catalan writer, Ángel Ros, who is writing, not very successfully, a Barcelona Ulysses with one major difference, namely that his hero, Dedalus, is an armed robber. While Dedalus is an armed robber, so are Ángel Ros and his girlfriend, a South American called Ana. The two make no effort to conceal their identities and are soon wanted by the police, as, indeed, are others, as there appears to be a crime spree in Barcelona at the time. We follow Dedalus, Ángel and Ana and, frankly, it does no go particularly well for any of them. As Bolaño commented, it is very violent and while it is an interesting idea, it is not a great novel and would not be here, were it not for its authors. 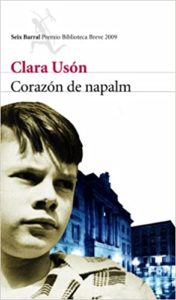 The latest addition to my website is Clara Usón‘s Corazón de napalm [Heart of Napalm]. There are two stories going in. The first concerns Fede, an overweight thirteen year old boy, whose parents spend their life partying and doing drugs. When it all goes wrong, the parents split up and Fede and his father move to Santander, where his father has a new wife. Fede and his stepmother hate each other and Fede decides to run away to find his mother. It does not work out well. Meanwhile, Marta is painting for the famous artist, Maristany. He has a tremor so he has the ideas and she carries them out. The clients are none the wiser. However, she is fired by Maristany’s new wife, Solange. Sometime later she meets Juan, a judge specialising in juvenile crime. They start an affair, which has its ups and downs, while she struggles to make a living, till Solange phones her after Maristany’s death, to carry on her work. Though various things go wrong in both stories, the two do converge and in a surprising way. It is a very clever book with interesting ideas on art and juvenile crime but sadly not available in English. 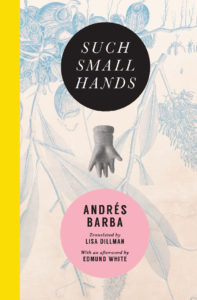 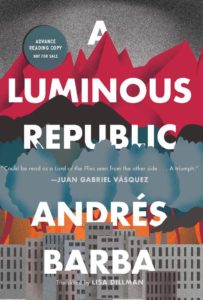 The latest addition to my website is Andrés Barba‘s República luminosa (A Luminous Republic). The novel is set in an unnamed Latin American country. Our unnamed narrator has recently taken over the social service department in a small town, by the jungle, with the task of helping the indigenous community. Gradually he and the people of the town notice groups of children, aged nine to thirteen, coming into the town and begging. Where did they come from and what is the strange language they seem to be using? Gradually, they become more aggressive. They seem to disappear at night and no-one knows where to. Moreover, they do not seem to have a leader. When they start attacking people, the police go searching for them but without success. When they attack a supermarket, injuring and killing people, they seem to disappear and cannot be found. Barba gives us a brilliant novel on the innocence (and lack thereof) of children, on how adults can often be helpless dealing with them and on various theories as to why these children do what they do, with a bit of post-truth thrown in. 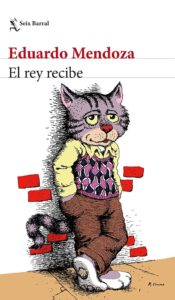 The latest addition to my website is Eduardo Mendoza‘s El rey recibe [The King Receives]. This is apparently the first in a trilogy about Spain in the second half of the 20th century but, quite frankly, it does not work, not least because not much happens and the hero/narrator is, by his own admission, not very exciting. We follow Rufo in his career in Spain – journalist, editor of gossip magazine – and then in New York – unspecified job with Spanish Chamber of Commerce, his somewhat messy but not very interesting love life, his meeting with the Prince of Livonia and his wife and a few events in Spain and the US. Nothing really happens to him of much interest, his acquaintances, colleagues and family are no more interesting than he is. It has not been translated into any other language, so if you read Spanish, do not bother and if you do not read Spanish, do not look out for a translation. 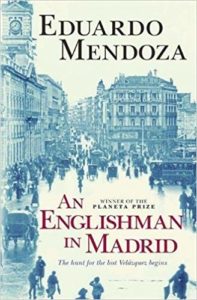 The latest addition to my website is Eduardo Mendoza‘s Riña de gatos (An Englishman in Madrid). Though unusually for Mendoza set in Madrid instead of Barcelona and environs, this book is his usual mockery of all and sundry, particularly the eponymous Englishman. He is Anthony Whitelands, a thirty something English art expert, specialising in Spanish art. The time is early 1936, just prior to the start of the Civil War. The country is in turmoil. He has been given a commission to advise on some paintings for a Spanish duke who wants to sell what he can to finance his escape from Spain, if that proves necessary. Whitelands gets caught up in the standard complicated Mendoza plot, involving the painter Velazquez, the murkier side of both British and Spanish politics, Soviet agents, a whore with a heart of gold and his own passions for alcohol, women and art. He meets various historial figures, including General Franco, and he bumbles around, making one wrong move after another. It is, as always with Mendoza, great fun, with lots of mockery and a complicated funny plot.

The latest addition to my website is A. G. Porta‘s Me llamo Vila-Matas, como todo el mundo [My Name is Vila-Matas, Like Everyone. This is a short absurdist book, consisting of a dialogue between two unnamed people, who are called Vila-Matas, like everyone. The basic premise is that the Spanish writer Enrique Vila-Matas has come to New York to appear in an Off-Broadway version of one of his books. However, Allison, the promoter, has disappeared and Vila-Matas is searching for her (both in the real world and in various books), while also putting on two plays of his own. Meanwhile, our two dialoguers are discussing Vila-Matas and his search, the future of the novel, absurdist literature, the theatre and similar topics, all the while maintaining that they are Enrique Vila-Matas like everyone, except, of course, when they are someone else. It is clever, it is witty, it is absurdist. Like everything else.