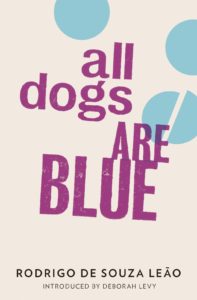 The latest addition to my website is Rodrigo de Souza‘s Todos os Cachorros São Azuis (All Dogs are Blue). Rodrigo de Souza suffered from mental health issues and, for a long time, would not leave his house. This novel is the story of an unnamed narrator who is in a mental hospital, as a result of a psychotic episode. He is now thirty-six but has had mental issues since the age of fifteen. We follow his story: the chip implanted in him by the CIA and KGB, the aliens who are coming to take him away, his imaginary friends, Rimbaud and Baudelaire, how he avoids taking pills, the sad stories of many of the poor of Rio with mental health problems and his obsession with the colour blue, the colour of his stuffed dog and of the pill Haldol. He is finally released, only to start an (imaginary) religion called Todog, of which he is the leader. At times, he is lucid, most of the time he is not. It is a grim and sad tale of a man unable to cope with reality. 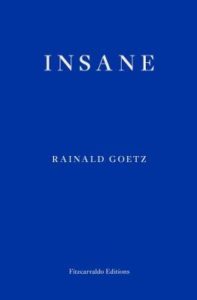 The latest addition to my website is Rainald Goetz‘s Irre (Insane). The book is about both a psychiatrist called Raspe and a multimedia artist called Rainald Goetz, both of whom worked in a psychiatric clinic which both have left by the end of the book. Goetz was in real life a psychiatrist and he has written an impassioned often angry book about the failures of psychiatry and psychiatrists, often taking the view that we are all insane, that psychiatrists may be more insane than the rest of us and that art may be the salvation. We follow Raspe’s career in the clinic, we hear the ravings of both the staff and patients and, in the final part, we see Goetz and, to a lesser extent Raspe trying to deal with the effect of their career on their lives. At times it reads like a cry from the heart and at others an indictment of the world we live in but it both cases it is an amazing read and we must be grateful for Fitzcarraldo for making it available in English thirty-four years after its publication in German.