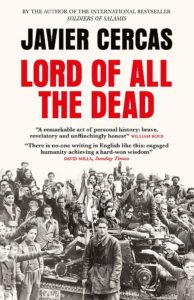 The latest addition to my website is Javier Cercas‘ El monarca de las sombras (Lord of All Dead). This is another non-fiction novel from Cercas, as he sets out to find the true story about his great-uncle, Manuel Mena, who fought for the wrong side, i.e. Franco, in the Spanish Civil War. Most of those involved are dead, Mena himself having been killed at the Battle of the Ebro, aged nineteen. He investigates Mena’s story and finds missing element and inaccurate information but he also looks into the motives of people like Mena and others who supported Franco against what Cercas considers their own interests and investigates these and other issues such as honour and glory as well as the idea that history is often more complicated than it seems at first glance. It is another first-class work from Cercas.

The latest addition to my website is Claudia Hernández‘s Roza, tumba, quema (Slash and Burn). This novel is set in El Salvador before, during and after the Salvadoran Civil War. We follow a young woman, who has seen violence as a child and, once the war starts, is threatened with sexual violence. She joins her father in the guerrillas. When she gets pregnant – she was not aware that she was – and has a baby, the child is taken away from her. She ends up with five daughters and no husband by the end of the war and we follow her struggles to bring up her daughters, her successful attempt at finding her missing daughter and also the struggles of the daughters to survive in post-war El Salvador. Above all, we learn of the extensive violence in the country, mainly though not only against women. It is a grim but important novel about violence.

The latest addition to my website is Eugene Vodolazkin‘s Соловьёв и Ларионов (Solovyov and Larionov). This is Vodolazkin’s first novel (though not the first to appear in English) and a superb one it is. General Larionov was a general in the Russian Civil war but on the White Russian side. He commanded a force in the Crimea and held off a superior army of Soviet soldiers for some time. The most surprising thing for those who study him, is that he survived to a ripe old age, living in Russia, and was not arrested or shot for his actions. Solovyov is a young historian. The fact that his first girlfriend was called Leeza Larionova may have helped him to have an interest in the general. Solovyov is a dogged and serious researcher and he is determined to track down the general’s missing memoirs and find the reason why he escaped being shot, as well as solving other mysteries regarding the general and, finally, trying to find Leeza, who seems to disappear. He has a series of adventures, attends a conference on the general, which enables Vodolazkin to mock academics, and pursues his searches and researches assiduously. It is a wonderful story and superbly told by Vodolazkin. 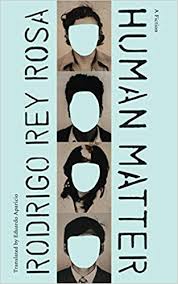 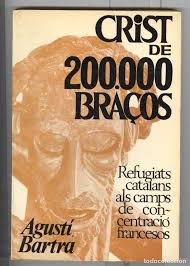 The latest addition to my website is Agustí Bartra‘s Crist de 200.000 braços [Christ of 200,000 Arms]. This novel is set entirely in the Argelès-sur-Mer concentration camp in southern France, which housed 100,000 prisoners (hence the title) at the end of and after the Spanish Civil War, who had fled Francoist Spain. Bartra was a prisoner there. He was primarily a poet and this is a poetic novel, while not shunning the grim reality of life in a bitterly cold camp, rife with disease, fleas and a diet of lentils. Four former comrades come together. They build a shelter, tell each other strange tales and look back to their previous lives, while trying to survive as best they can. 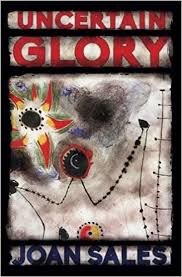 The latest addition to my website is Joan Sales‘ Incerta glòria (Uncertain Glory). This is a long rambling novel but is considered the best Catalan Civil War novel. It focusses on four people. The first is Lluis, an intellectual and a lawyer who lives in his own world, though he has a common-law wife, Trini, and a son back in Barcelona. He meets the widow of the local lord of the manor, a working woman who had married the lord, and he falls for her. His best friend is the cynical Soleràs, who is secretly in love with Trini himself but whom she considers as a brother rather than a lover. The second part of the novel follows Trini in Barcelona, both her life before the War and her current life, agonising over Lluis and his fidelity (he hardly writes to her) and suffering the problems in Barcelona, while reminiscing about her past. The third part focusses on Cruells, the unit medical orderly, who is religious (a dangerous, at times fatal thing to be in Barcelona), who becomes increasingly disillusioned. We see the war is 99% boredom, 1% sheer terror approach, as the unit sees some action, which gets worse as the war progresses, but much of the time they spend drinking, chasing women and philosophising. It is perhaps a bit long but still a worthwhile read to see a picture of the Republican cause that is not always rosy.

The latest addition to my website is Jesús Moncada‘s Camí de sirga (The Towpath). This is is factionalised account of the town of Mequinenza, Moncada’s home town. which was moved to the other side of the river Ebro to make way for a hydroelectric dam. Moncada gives an affectionate but at times mocking account of the town and its inhabitants as they prepare for the move, delving back into the history of the town. We follow, in particular the story of Carlota Torres, from her childhood to the time of the move. She remains the last hold-out, refusing to move. There are many divides in the town but, in particular the divide between the rich and poor, which comes to the fore during and after the Civil War. The rich are hypocritical, conducting numerous extramarital affairs, while condemning immorality. The town has done well out of coal, particularly in the two world wars, and shipping on the Ebro. Moncada gives us a rich account of many of the people of the town, past and present, rich in humour but also in affection, at times, poignancy. 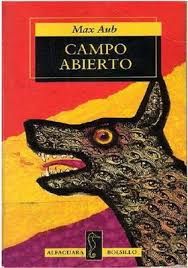 The latest addition to my website is Max Aub‘s Campo abierto [Open Field], the second book in Max Aub’s Magic Labyrinth series about the Spanish Civil War, though the third to be published. This one is set in Valencia in the first part (where Aub grew up) and Madrid in the second part, leading up to the fall of Madrid to the Francoist forces. The book is a series of stories about the various individuals caught up in the Civil War, mainly, though certainly not exclusively on the republican side. We follow a revolutionary theatre group, in particular two young people, Vicente and Asunción, who are in love but too involved in their theatre and politics to tell one another. We also follow various individuals who get shot, because they are on the wrong side, in the wrong place at the wrong time or, in a few cases, fighting against the enemy. Summary executions occur all too frequently. When we move to Madrid, we follow the approach of the Francoist forces as they gradually get closer, with the poorly armed republicans unable to resist Franco’s tanks. Vicente and Asunción both move to Madrid, he fighting with the forces defending Madrid, she with the theatre group. The book ends as Madrid is about to fall to Franco. Aub tells an excellent story, showing the dissent within the republican forces, both the enthusiasm of many of the ordinary people as well as the horrors they have to face and the inevitable defeat, which they cannot believe will happen. 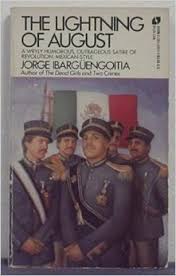