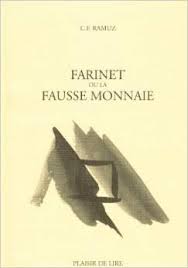 The latest addition to my website is Charles-Ferdinand Ramuz‘s Farinet ou la fausse monnaie [Farinet or the Forged Money]. Maurice Farinet, when young, befriended an old man, Sage, who had found a vein of gold in the mountains. When he died, it became Farinet’s. He uses the gold to make twenty franc coins. Given that his coins are of better quality, in terms of gold content, than those made by the government, he cannot think that anyone can object. Indeed, the locals are happy to have his coins. The government takes a different view and, at the beginning of the novel, we see him escaping from prison for a second time. The police, who are not local, are unable to find him, as he is aided by the locals and has a very secret hiding place in the mountains. In particular, he is aided by Josephine, the waitress at the café who helped him after his first escape. It was Josephine who smuggled in the file and rope he used to escape the second time and it is she who brings him food. However, as one of the old men remarks, she is likely to be trouble. Farinet comes to recognise that he cannot continue as an outlaw forever, not least because hiding out in the mountains during the harsh winter may be difficult. When a local councillor brings him an offer from the government – to turn himself in, give up forgery and serve just six months in prison, during the winter months – he rejects it initially but then strongly considers it. Josephine, however, may have other ideas. Ramuz, as always, tells an excellent story of the independence of the mountain man and his struggle with what freedom means and what responsibilities it brings.