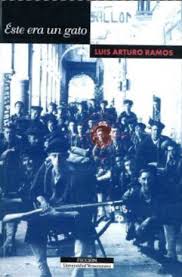 The latest addition to my website is Luis Arturo Ramos‘ Este era un gato [This Was a Cat]. This novel, which has not been translated into English, tells the story of Roger Copeland. He was part of the US troops that occupied Veracruz, Mexico, in 1914. While there, he met a whore called Teresa Triana but whom he calls Tirana and they had a few nights of passion. He is then sent further into the town, where he has to pick off snipers. He tracks down one particular sniper and kills him. When he returns to the town and finds Tirana, instead of welcoming him, she shoots him, hitting him in the knee before fleeing. He is taken on board ship and then to Galveston, where his knee is treated, though it will continue to give him trouble. Sixty years, later, a retired military captain who speaks good Spanish after having spent time in Cuba and now a widower, Copeland decides to take a cruise, with the ship spending seven days in Veracruz.

Copeland gets off the ship and checks into a seedy hotel (a whores’ hotel, as the cruise director tells him). When the ship leaves, Copeland does not, staying mainly in his room. He is found by a couple of local journalist and two of their colleagues – Alberto Bolaño and his friend Miguel Angelo – spend time with him and listen to his story. However, right from the beginning of the book, we learn that Copeland is dead, shot in the head in his bed, a beatific smile on his face. Before that, he has been looking for Tirana. He may have found her and the two journalists may also have found her. She may have been seen going up to his room one night. We do know that the journalists learn his story and that someone has killed him. Ramos tells us an interesting if, at times, convoluted story which is part whodunit, part an attempt at looking back at history and seeing how it affects the present and part expiation of guilt or, at least, an attempt to expiate guilt and/or recover a lost love. It works well and is certainly a good read. It is a pity that it has not been translated.