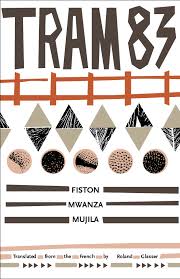 The latest addition to my website is Fiston Mwanza Mujila‘s Tram 83 (Tram 83). As I say in my review, this is the noisiest novel I have ever read and if you don’t think that a novel can be noisy, read this one. It takes place in the major town in a place called merely City-State, a mining country that has seceded from the main country and may be based on Katanga. It is run by a thoroughly corrupt dissident general who has erectile dysfunction problems. Though the novel starts and ends in the noisy, chaotic, dirty shambles of a station, much of the action takes place in the even noisier and more chaotic Tram 83, a restaurant and hooker bar, named after a late night Brussels tram line. Lucien is the diffident intellectual, who is trying to write a play about the country and the General. He has come in from the Back Country, where most of the mining takes place. He is staying with his friend, Requiem, an action man who always seems to have some dodgy deal on the go. Lucien struggles to cope with life, particularly life in the City-State, where corruption, violence, noise, casual sex and eating dogs seem to prevail. Mwanza Mujila gives us a superb portrait of a failed state, a big change from the often somewhat romanticised view of Africa we get in African novels, showing us the noise and chaos and corruption, warts and all. It is a novel that both Africans and non-Africans should read to get a different view of the region.