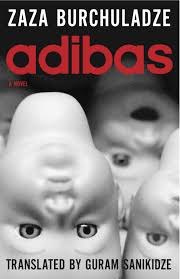 The latest addition to my website is Zaza Burchuladze‘s რომანი (Adibas), another fine novel from Dalkey Archive Press’s wonderful Georgian Literature Series. This one is a supremely cynical novel by a writer known as the bad boy of Georgian literature. In this novel, Shako (aka Gio) is an actor, in between assignments, who spends most of his time hanging out with friends, engaging in sex with a series of girlfriends and doing drugs. He and his friends seem to have few interests beyond these activities, with scoring the latest drug their main concern. However, as they go on with their lives and gratifications, Georgia is under invasion by Russia. Though Tbilisi may be bombed or even be under chemical attack, they really do not care all that much. It may be now and then a minor inconvenience. A Russian drone approaches Shako in the street but he finds it rather amusing, though the street cleaner nearby does not. A road is closed but that merely means rescheduling his meeting. As long as he can get his oral sex and his drugs and some occasional acting work, everything is fine and who cares about Abkhazia? This is a very amusing and very cynical novel and we should be grateful to Dalkey Archive press for making it available to us in English.