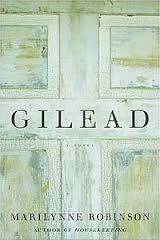 The latest addition to my website is Marilynne Robinson‘s Gilead. This is another first-class novel from Marilynne Robinson and, in fact, the first of a trilogy of novels, set in Gilead, Iowa, about the Ames and Boughton families, where the paterfamilias, in each case, is a professional religious minister. This book is narrated by John Ames, seventy-seven at the time of writing and with a heart condition, so worrying somewhat (but not too much) about what he sees as his imminent death. Ames had married young but his wife, Louisa, had died in childbirth with their first child, and the baby had died too. He had remained a somewhat lonely widower till he met a much younger woman, Lila, and had married her (at her suggestion). They have a son, who is almost seven, and Ames’ narration is a long letter to his son. Ames recounts the story of his father and grandfather. His grandfather had moved to Kansas from Maine to help John Brown and the Free-Soilers, those seeking to make Kansas a free rather than a slave state. John Ames’ father is aware that his father had been involved in some violence at that time but no details are given. When he was older, the grandfather had come to live with his son, John Ames’ father, but had then wandered off to become an itinerant preacher. After they find out where he is, the father plans to set off and find him and the twelve-year old John asks to accompany him. The journey will have a profound effect on both father and son. 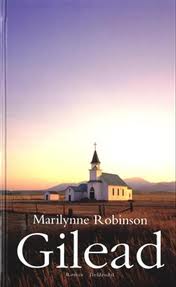 John has followed in his father’s and grandfather’s footsteps and become a minister. Much of this book is about his life as a minister and what his faith means to him. He is a pragmatic minister, always willing to help his parishioners, not only in matters of faith but in more practical areas. His parishioners are often poor and that poses its own set of problems. Above all, though he has a joy of life, a joy in his faith and a love of people. But he is no saint and has his own set of problems, not least with Jack, the wayward son of his best friend, Robert Boughton. Jack is wilful. As a child he committed various petty crimes. as a young adult, he got a young local woman from a poor family pregnant and refused to marry her or even look after her. Try as he might John Ames cannot accept Jack. Overall, this is a first-class book about faith, about the complexity of relationships and, above all, about what it means to be a good and decent man, struggling with life’s problems.