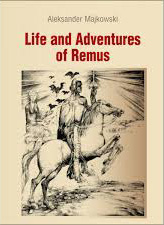 The latest addition to my website is Aleksander Majkowski‘s Żëcé i przigodë Remusa. Zvjercadło kaszubskji (Life and Adventures of Remus), the first and almost certainly the last Kashubian novel on my website. Kashubia is in the North-Western part of what is now Poland, west of Gdánsk. This novel, first published in 1938 soon after its author’s death, has been called The Great Kashubian Novel. It tells the story of Remus. We first meet him through the eyes of the young narrator. He is an old and very poor man, dressed in rags, who sleeps anywhere and eats anything. He makes his living as a pedlar, selling books. The narrator, while, like other children, somewhat afraid of him, is also interested in him as he talks about a mysterious submerged castle and a princess caught in a spell, who needs rescuing. The narrator goes away to school and, when he returns, he learns that Remus has died. He learns, however, that Remus has left him a manuscript, which tells of his life and which is the rest of the novel. 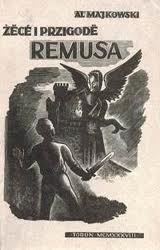 Remus grew up as a young farm boy on a rural farm in Kashubia. One day, while out with his flock, he comes across a mysterious castle and hears a cry for help from a princess on the other side of the river from the castle. She asks him to carry her across but, as he is about to do so, three monsters rise up out of the river. Initially, at the princess’s instigation, he is not scared but then loses his courage and lets her down. Castle, monsters and princess disappear. He continues to look for the castle and the princess. He finds a golden sword and a cooking pot containing ashes, which he assumes are hers and which he buries. With the help of one of the young women on the farm, he tracks down domestic ghosts and even fights and almost kills a monster (who turns out not to be a monster). When he again finds the princess and the castle, things become complicated, particularly after meeting a strange wounded man on the farm and learning about the travails of Kashubia. It is an enjoyable novel, with elements of Don Quixote in Remus and certainly the only Kashubian novel any of us are likely to read. While it has been translated into English, the English text is not easy to obtain (see link my website for more details.)