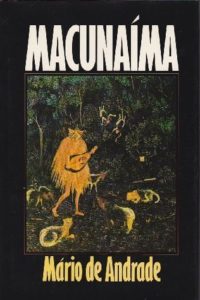 The latest addition to my website is Mário de Andrade‘s Macunaíma (Macunaíma). When it first appeared, this was quite a revolutionary book, in that it was unlike other Brazilian novels of the time. We follow the story of Macunaíma, who is a trickster, a mythical person, who can perform magic but who is always up to no good, particularly where the opposite sex is concerned. We follow his birth and early years (he has sex with his sister-in-law when he is six years old by changing into a handsome prince), his accidental but foretold killing of his mother and his journey, with his brothers, to São Paulo, where they encounter a man-eating giant, whom he kills twice and who kills him twice. Both survive their deaths. We meet talking animals, people turned into stars, the Sun and her three daughters, and a host of other magical creatures, people and events, all written in a colourful language and all focussing entirely on Brazil and things Brazilian. It is great fun, very original and entirely unpredictable.