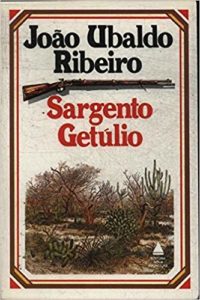 The latest addition to my website is João Ubaldo Ribeiro‘s Sargento Getúlio (Sergeant Getúlio). Sergeant Getúlio is a tough and brutal sergeant in the military militia who has to take a prisoner from the backlands to Paulo Afonso, Bahia. However, there are a lot of people who do not want him to succeed but the sergeant is a very determined and ferocious man. The story is told in a monologue by the sergeant who is proud of the many violent and brutal acts he has committed, including torturing his current prisoner, killing his pregnant girlfriend when she cheated on him and killing at least twenty people (he has, as he says, lost count, as with the number of women he has had). We may admire him for his courage and determination – nothing and nobody will stand in his way – while despising him for his cruelty and violence, albeit in a very cruel and violent part of the country.