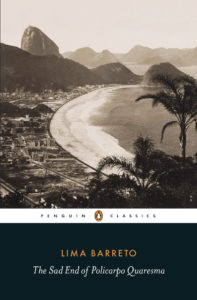 The latest addition to my website is Lima Barreto‘s Triste fim de Policarpo Quaresma (The Patriot; later: The Sad End of Policarpo Quaresma). The book is set in the 1890s and is a satire on the people of the era. Our eponymous hero is a respected civil servant, a bachelor who lives with his unmarried sister. He is also a committed patriot, spending his time reading books about Brazil. His problems start when he submits a proposal to Congress that Tupi-Guaraní , a native language of Brazil, should be the official language of the country instead of Portuguese. It gets worse when he inadvertently submits a document he has translated into Tupi-Guaraní to a higher authority and he is suspended and has a breakdown. Convinced that the Brazilian soil is the most fertile in the world and the Brazilian peasant hard-working, he heads for the country where his views are severely tested. When a rebellion breaks out, he, as a former army major, rushes to the service of his country. As the title tells us, it does not work out well. Barreto mocks virtually everybody, but particularly politicians and the military, but it is the good if naive man, Policarpo, who pays the price.