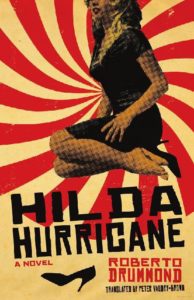 The latest addition to my website is Roberto Drummond‘s Hilda Furacão (Hilda Hurricane). This is a very witty novel about a young woman from a prosperous background who gives it all up to become a prostitute and very successful she is, as all the men fall for her. Why does she do it? Our hero, a communist and journalist, tries to find out, while helping his two friends, one a saint, Malthus, and the other a gigolo, and also getting involved in the plan of the Catholics and a property developer to move the red light district out of the centre of town (Belo Horizonte) to the outskirts of town. Things get more complicated when the saint is trying to exorcise Hilda Hurricane and sees her for the first time. His reaction is similar to that of the other men. Roberto has also his own love problems, two very religious aunts, a keen love of his local football team, his journalistic career, political upheaval in Brazil and bad toothache. It is witty. It is clever and it is very lively. But was there really a Hilda or is she just an April fool’s joke?