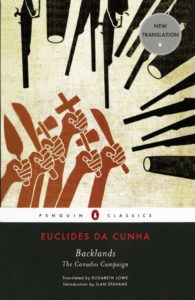 The latest edition to my website is Euclides da Cunha‘s Os Sertões (Rebellion in the Backlands; later: Backlands: The Canudos Campaign). This is not a novel but has had considerable influence on Brazilian and other literatures and is sometimes mistaken for a novel, as it reads like one. It is an account of War of Canudos, a rebellion by a religiously fanatical group under the leadership of Antônio Conselheiro (Anthony the Counsellor), which believed in suffering in this life for great happiness in the afterlife. The group were based in Canudos, a remote township in the backlands of Northern Brazil. One police action and four military expedition were sent to control them and the final one only succeeded with far superior firepower. The others were defeated by guerrilla tactics and fierce resistance. All the men were either captured (and summarily and brutally executed) or fought to the bitter end. Da Cunha tells a superb story, with full blow-by-blow accounts of the expeditions, the politics and the details of the harsh landscape.