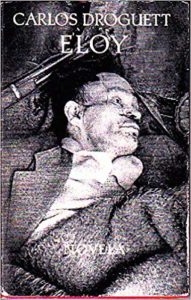 The latest edition to my website is Carlos Droguett‘s Eloy [Eloy]. Ñato Eloy was a real-life Chilean bandit, killed by the police in 1941. This novel recounts the last twenty-four hours of his life, as seen from his perspective. He is hiding out in a shack, where an old man and young woman live. Both are naturally afraid of him but he eventually sends them away. The novel consists of his thoughts about his present situation (he is optimistic that he can escape), his past, with thoughts about his wife/lover Rosa and their son Toño, his past exploits and his earlier life, and his future, with plans for what he is going to do. We jump around these three and, at the same time, Droguett mixes in first-person, second-person and third-person narration for telling his tale, all to emphasise Eloy’s confused state of mind. This novel is still in print in Chile, where it is considered one of the foremost Chilean novels, and has been translated into seven languages but not English.