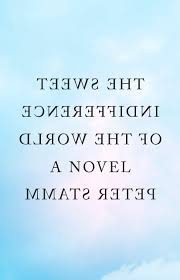 The latest addition to my website is Peter Stamm‘s Die sanfte Gleichgültigkeit der Welt (The Sweet Indifference of the World). The novel tells the story of a former writer, Chris, who meets an actress called Magdalena while in Stockholm, whose life seemingly mirrors his own life and that of his ex-girlfriend, also an actress called Magdalena. Not only does the new Magdalena have a boyfriend called Chris who is writing a novel, as he recounts his story to her both find a lot in common, far too much to be coincidence. Indeed, even while they are meeting regularly while she is in Stockholm with her Chris, who is busy most of the day, her life takes a turn which mirrors what happened to Chris and Magdalena 1. Is it coincidence, planned or just nonsense? Stamm leaves us in suspense as we follow the two stories simultaneously and gives us enough clues for different interpretations of what really happened – if it really did happen.