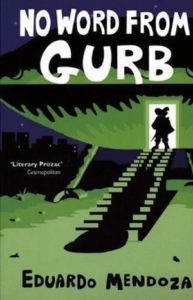 The latest addition to my website is Eduardo Mendoza‘s Sin noticias de Gurb (No Word from Gurb). This follows Mendoza’s usual pattern, in that we see Barcelona and its inhabitants from the perspective of the narrator/protagonist. However, the difference is that the narrator is not from planet Earth but part of a two-man team (the eponymous Gurb is the other one) exploring the Universe. When they land, Gurb soon disappears and our narrator spends the rest of the book looking for him. We follow his struggle with humans, his view of humans and, in particular those from Barcelona, and his failed and increasingly ignored search for Gurb, as he is sidetracked by the difficulties of living on an alien planet. It is at times very funny, at others a bit silly.