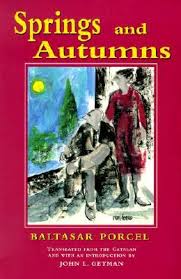 The latest addition to my website is Baltasar Porcel‘s Primaveras y otoños (Springs and Autumns). The novel is set at a Christmas Eve dinner in modern times at Taltavull Hall, home of the Taltavull family, living in Orlandis, Majorca (based on Porcel’s home town of Andratx). The novel tells the stories of several of the key characters, of some of their nearby relatives, and visitors (who are related to them). The key subjects of most of the stories are, inevitably, sex and death though the Civil War, travel abroad and other topics do appear. Some of the family members are very decent people, others have blood on their hands (particularly from the Civil War), some make good parents and spouses, others do not. In other words, they are like many other families even if one or two of them have more colourful stories(a clash with South American guerillas, involvement with a British spy in Burma, for example). Porcel tells his stories very well, with each family member proving to be different from the others,