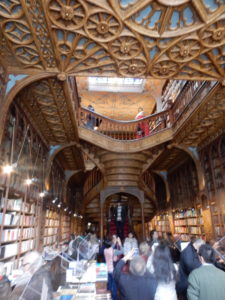 A long weekend in Porto revealed a few things, one of which is that it is wetter and colder in Porto than in (the South of) England. We visited the Livraria Lello, a bookshop famous for its appearance. As you can see from my not very good photo to the left, it is certainly an attractive interior. Indeed, J K Rowling, who spent two years teaching English in Porto, was inspired by it when she wrote Harry Potter. As a result the bookshop is permanently packed, mainly with Japanese tourists, taking photos. As a result the shop now charges an admission fee of €4, which you can put against any book purchase. However, while the interior is certainly attractive, the shop’s selection of Portuguese (and Portuguese-language) fiction was less so. They had a fairly pitiful selection – Saramago, of course, Eça de Queiroz, Miguel Torga, valter hugo mãe, who was their author of the month, but not his a máquina de fazer espanhóis [The Machine for Making Spaniards] and a few others but no Teolinda Gersão, no copy of José de Almada Negreiros’Nome de Guerra (see next post), a copy of which I found in the a chain book shop near by hotel, and a not a single one of the Portuguese books on my list to buy. It was even worse for other Portuguese-speaking countries. So go for the shop, particularly if you are a Harry Potter fan, but don’t bother going for the Portuguese literature.