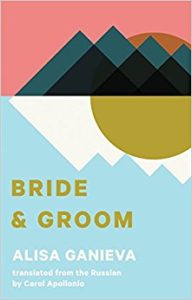 The latest addition to my website is Alisa Ganieva‘s Жених и невеста (Bride and Groom). As the title tells us, the story is, to a great extent, about marriage. Patya and Marat are both from the same town in Dagestan, though they do not know one another. Both are working in Moscow at the beginning of the book but return home. In both cases, their parents are eager for them to get married and both parents have potential partners in mind. The younger generation is split between those wanting greater freedom and those who have reverted to a more traditional Islam. The latter includes Timur, with whom Patya has been having an on-line discussion but whom she finally meets on returning to Dagestan. She is not impressed. She is, of course, more impressed with Marat, whom she meets but there are complications, including the respective parents, the local strong man and Timur, who has influential connections. It is another fine novel from Ganieva about tradition vs modernity and the role of women.