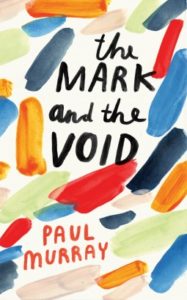 The latest addition to my website is Paul Murray‘s The Mark and the Void. This is a hilarious satire on the banking crisis of 2008 onwards and follows the story of an Everyman, Claude, a Frenchman working in a Dublin-based investment bank. We follow the nefarious and wittily described doings of the bank which are, at best, immoral and often illegal. We also follow Claude’s failed love life and, in particular, his friend Paul (possibly Murray), a failed writer, who comes up with various ideas to make his living, including robbing Claude’s bank and setting up a waitress porn website. Murray mocks bankers and banking, writers and publishers, the modern art world, the English, politicians, Eastern Europeans, lovers and anything else that comes into his sight, all the while exposing the failure of the banking crisis in a hilarious way. Unless you think bankers and writers are the salt of the earth, you cannot fail to enjoy this novel.