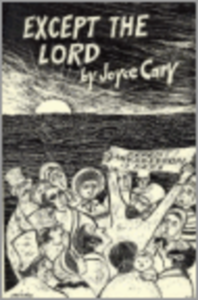 The latest addition to my website is Joyce Cary‘s Except the Lord, the second of a trilogy that started with Prisoner of Grace. In this previous novel, we followed the adult life of Chester Nimmo, as told by his ex-wife, Nina. This book is told by Chester himself and is mainly about his childhood. He grew up in a rural Devon village. His father was both a farm labourer and an Adventist preacher. The family was poor and, like many of the people of that time, suffered from health problems. His mother and two young sisters all died of tuberculosis. As Chester is writing this account, presumably for Nina, in an attempt to win her back, he often tells of things he did and the lessons he learned from his actions and the consequence, with the aim of showing how he has developed. We follow his interest in religion, left-wing politics and unionism as well as his relationship with his family. It did not work as well as the previous one for me but is still an interesting read to see how the adult became what he was.