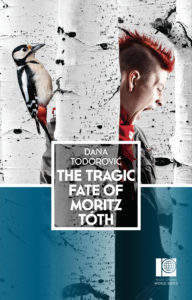 The latest addition to my website is Dana Todorović:‘s Tragična sudbina Morica Tota (The Tragic Fate of Moritz Toth). This is a clever tale of an unemployed punk rocker, the eponymous Moritz Toth, who finds salvation as the prompter for the lead tenor in Turandot. However, he also finds that at first one and then two mysterious characters seem to be stalking him. Who are they? Why are they stalking him and are they going to murder him? Meanwhile, we are also following the story of Tobias Keller, Advisor for Moral Issues with the Office of the Great Overseer, who has broken the rules in his role as guide to Moritz Toth by putting pebble in front of his bicycle in breach of Article 98a of the Causal Authority Regulations. Who is Tobias? Who is the Great Overseer? And what have they got to do with Moritz? Todorović tells a fine tale with philosophical conundrums, the problems of determinism and how opera and a loving prostitute can save a worried man.