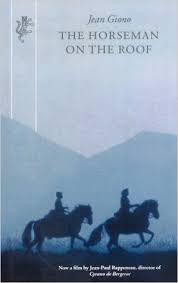 The latest addition to my website is Jean Giono‘s Le Hussard sur le toit (US/UK: The Horseman on the Roof; UK: The Hussar on the Roof). This novel is set in the 1830s during a major cholera pandemic. Angelo Pardi is an Italian revolutionary, fleeing Italy after killing a baron in a duel. He arrives during the cholera pandemic, which is vividly described by Giono. He sees many dead bodies, sees people dying and is also affected by the consequences (towns and villages barricaded, superstitious locals killing people suspected of bringing cholera, difficulties in obtaining food and drink). He does help a few people but ends up in Manosque (Giono’s hometown) where he has to live on the roofs, to avoid the mob. Eventually, he manges to escape, after a series of adventures, with a young but married woman, Pauline. Giono gives a superb portrayal of a country devastated by disease but counterbalanced by the optimism and pragmatism of Angelo and Pauline.

One Reply to “Jean Giono: Le Hussard sur le toit (US/UK: The Horseman on the Roof; UK: The Hussar on the Roof)”