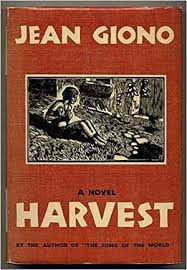 The latest addition to my website is Jean Giono‘s Regain (Harvest; later: Second Harvest). This is one of the classic 20th century French novels and beautifully written. It tells the story of Aubignane, a remote village, which has essentially been abandoned. At the start of the novel, there are only three inhabitants and one leaves, to go and live with his son, soon after. The two left are Mamèche who has lost her husband and son to accidents and Panturle, a younger man. Mamèche tells him that he needs a woman and he agrees. One day, she disappears without warning. Meanwhile, the knife-sharpener, Gédémus, is on his rounds, accompanied by Arsule, a young woman who arrived at Gédémus’ village with an abusive travelling player, Tony. Tony is sent on his way and Arsule stays with the much older Gédémus. On their rounds they arrive in Aubignane but Panturle takes fright and runs away. He slips and knocks himself out, falling in a stream. When he awakes, Arsule is caring for him. Her arrival heralds a change not only for Panturle but for the village. Giono’s descriptions and story-telling are masterful in this, one of his greatest novels.