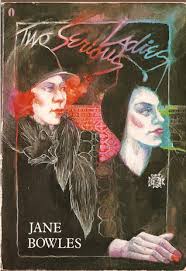 The latest addition to my website is Jane Bowles‘ Two Serious Ladies. The story mirrors, to a certain degree, Bowles’ own life and the life of her husband, Paul Bowles. It is also her only completed novel, published when she was twenty-five. It is a decidedly strange novel and got very mixed reviews when first published and had very limited success. The two serious ladies are Christian Goering and Frieda Copperfield though, throughout the book, they are usually referred to as Miss Goering and Mrs. Copperfield. The two meet briefly early in the book, and right at the end but, apart from those meetings, follow their own path. Miss Goering has generally been disliked by others, both as a child and as an adult. She does not particularly care, as she is well-off. She takes in a companion, Lucie Gamelon, in her expensive New York house, before moving to a house on an island, with Lucie, Arnold, a man she met at the same party where she met Mrs Copperfield and Arnold’s father, before going off with a rough man who thinks she is a prostitute. Mrs. Copperfield goes to Panama with her husband and has a Lesbian affair with a teenage prostitute, before falling to pieces though this is something, she says, she always wanted to do. The book is essentially about women leading their own life in their own way, however wrong or unconventional that way may be. It is not to everyone’s taste but is certainly an original, modernist work.