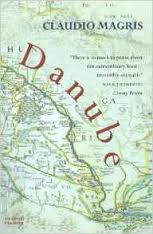 The latest addition to my website is Claudio Magris‘ Danubio (Danube). This is not really a novel, though Magris himself calls it a drowned novel, and the introduction to my Italian edition calls it part novel/part non-fiction. It describes a journey from the source of the Danube (which is disputed) to its outlet in the Black Sea (also disputed) and also discusses the division between the Upper and Lower Danube (also disputed). It also discusses Strauss’ contention that the Danube is blue (not true and not invented by Strauss, either). However, what makes this book a classic of modern European literature is Magris’ brilliant discussion of and ruminations on the culture, history, literature, politics and habits of the people who live, fight and write around the Danube. The novel is full of stories about individuals, dead and alive, but also ruminations and discussion on major philosophical, literary and political questions, from the Holocaust to what makes a good work of literature. It is a superb book which not only will you not fail to enjoy but from which you will learn a lot you did not know about the history, literature and people of Mitteleuropa.