I shall not describe writers associated with Venice, as I did with Trieste. Suffice it to say that many, many writers have been inspired by Venice. Goldoni, Marco Polo and Casanova were born here, Shakespeare was influenced by it and, more recently, a whole slew of writers, from Henry James to Hemingway, from Goethe to Thomas Mann, from John Ruskin to Mary McCarthy, have been inspired by it. My list of books set in Venice shows that a lot of writers wrote about it. 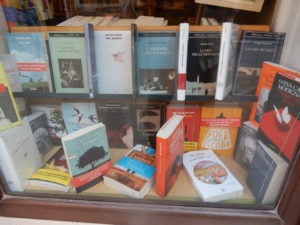 I only managed one bookshop visit as, for obvious reasons, there are not many bookshops in the tourist areas. The front window displaying new books in the Toleta bookshop shows an alarming lack of Italian works, with only books by Sveva Casati Modignani, Lorenzo Marone, Luigi Malerba and Primo Levi. The latter two are dead, the first is a husband and wife team – he is now dead and she is seventy-nine. Only Marone is (relatively) young at forty-two. Do I need to tell you that he has been translated into French and German but not English? Inside, things were not much better for relatively recent authors. Ferrante was, of course, on display, as was the new novel by Silvia Avallone, author of Swimming to Elba (described by Amazon as The provocative international bestseller about two young girls growing up fast in a failing industrial town on the coast of Italy, and which was called Acciaio (which means Steel) in Italian. Maybe the Italian novel is in the post-Ferrante doldrums.

No matter because, as the title says, I want to talk about Armenia here. San Lazzaro is an island South-East of Venice. It had been a leper colony. In 1701, an Armenian monk, Mekhitar founded a religious community in Constantinople. His community was driven out by the Ottomans and went to Morea in Greece, then a Venetian colony. There he met various Venetians, including Alvise Mocenigo, later to be Doge of Venice. They helped Mekhitar and his community set up on San Lazzaro and the community is still there, albeit much reduced. It should be noted that the community is a Catholic and not Orthodox community. You can visit it once a day (tour start at 3.25 p.m.).

The community is interesting from the literary point of view for two reasons. One regular literary visitor to Venice I did not mention above was Lord Byron. Byron also visited San Lazzaro and, as a man who supported the cause of the underdog, he soon became interested in the situation of the Armenians. He stayed at the monastery, started learning Armenian and helped one of the monks compile an Armenian-English dictionary and an Armenian grammar.

As the major location of the Armenian diaspora in Western Europe, the monastery attracted a lot of support from exiled Armenians. This involved both gifts in money and gifts in kind. The gifts in kind were quite varied and included a variety of artefacts and books/manuscripts, some of which were related to Armenia and some of which were not. As a result, the monastery is now a museum. It also holds one of the finest collections of Armenian manuscripts and books outside Armenia. The book just above to the right, for example, is the first book printed in Armenian. It was not printed in Armenia but in Venice, in 1512. Most of the early manuscripts held by the monastery are religious texts but this is not. It is called Ուրբաթագիրք (Urbatagirk), which translates as The Friday Book (not to be confused with the John Barth book of the same name). Friday is traditionally an unlucky day for Armenians, particularly for travellers. This book offers spells, incantations, advice and so on to help Armenian travellers on Fridays. If your Armenian is up to it, you can read the entire book. Sadly, it has not been translated into English or, as far as I can see, any other language.

The library was helped by the generosity of the Cairo-based Armenian antiques dealer Boghos Ispenian, whose picture you can see at the left (his picture is over one door and Byron’s over another). The books and manuscripts are in a variety of languages and not just Armenian, including, Latin, Greek, Hebrew, Persian (a copy of the Shahnameh) and even Ge’ez, the ancient Ethiopian language. While you cannot view most of the manuscripts, there are a few on display, such as the The Friday Book mentioned above. There are also many strange objects on display, including a very well-preserved Egyptian mummy. Well worth a visit if you are in Venice.