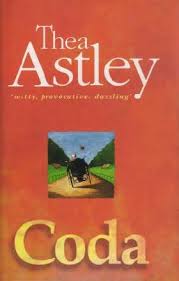 The latest addition to my website is Thea Astley‘s Coda. This novel is an affectionate tale about an Australian woman, Kathleen, who is getting older and dementia and incontinence are creeping on. Despite this she keeps on going, despite the fact that she gets lost or locked into shops or galleries. We follow her life: marriage to Ronald, just demobbed after the end of the war, in thrall to his father and having to run his father’s store in first in Queensland and then, after the death of his father, running the store in Honiara, Solomon Islands. Ronald cannot cope and the family moves back to Queensland, where Ronald soon dies of cancer. Kathleen brings up her two children, Brian (known as Brain) and Shamrock, both of whom do badly at school though, seemingly, make quite good marriages, even if Kathleen does not take to their respective spouses. Neither of them but particularly her daughter, Shamrock, married to a rich Member of Parliament/property developer, is particularly helpful to their mother in old age. However, it may be the end of her life and she may forget everything, but Kathleen is determined to keep going and keep going she does.