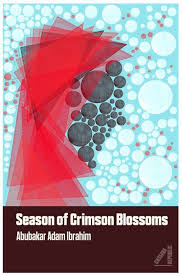 The latest addition to my website is Abubakar Adam Ibrahim‘s Season of Crimson Blossoms. This is a novel set in contemporary Nigeria, against a background of violence, corruption, drug-dealing and religious extremism. Binta is a fifty-five year old Muslim. Her husband was killed in religious riots ten years previously and her son shot by the police fifteen years previously. She has a successful son still alive and two married daughters, though one daughter has just left her second husband. She lives with her niece, who witnessed her father and brother killed in religious riots, and her granddaughter. One day she is attacked by a robber in her house, who has come to steal from her. However, when he sees her face to face, he backs off and the next day returns most of the stolen items. He later comes to apologise. Soon despite the thirty year age difference they have started an affair. She reminds him of the mother he barely knew. He reminds her of her son killed by the police. The robber, Reza, is part of a gang that is involved in drug-dealing and which works for a rich senator who uses the gang to carry out his dirty deeds. When the senator orders the kidnapping of the son of a rival and the kidnapping goes wrong and the affair between the two soon becomes the talk of the town, both of them are in a difficult situation. Ibrahim tells an excellent story of a quasi-Oedipal relationship against the background of a country in turmoil.