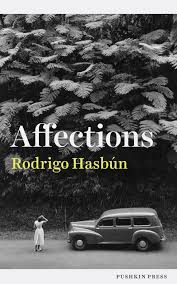 The latest addition to my website is Rodrigo Hasbún‘s Los afectos (Affections), a first-class novel, based on the story of a real German family that emigrated to Bolivia. The family is the Ertl family: father, a former cameraman of Leni Riefenstahl, mother, a chain smoker who will die of cancer, and three daughters, one of whom will join Che Guevara’s guerilla group, the second who will return to Germany and the the third who becomes a chain smoker like her mother and remains solitary. The story starts with an expedition, led by Hans, the father, to find a lost Inca city. He takes his two oldest daughters, Monika and Heidi. The expedition is not a success, though Heidi meets and marries a fellow expedition member and Hans runs off with the entomologist. Aurelia, the mother, and Trixi the youngest daughter, thirteen years old, stay behind and smoke. While we follow the fate of the others as well, the focus is on Monika, who joins Guevara’s guerilla group and becomes the most wanted woman in Bolivia. The book, however, is about their relationships, complicated, affectionate to a certain degree, as the title implies, but always fraught. For a relatively short book, the novel packs a real punch and is superbly told by Hasbún.