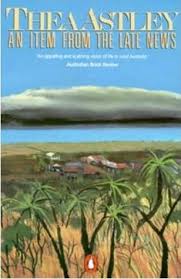 The latest addition to my website is Thea Astley‘s An Item from the Late News. This is another first-class novel from Astley on the theme of the different outsider arriving in a closed, small community and not fitting in. The outsider is known only as Wafer (we learn that his real name is Lionel). He saw his father killed by a doodlebug during World War II in London and since then he has had a mortal fear of The Bomb. He has come to the remote Queensland town of Allbut in order to build the perfect bomb shelter, which he sets out to do. But he does not fit in. He is friendly towards the despised aborigines, he is helpful to strangers and does not really drink. He even becomes close with other outsiders, Smiler Colley and his thirteen year old daughter and Moon, who may be from Louisiana and who is a fossicker, i.e someone who indulges in amateur and often illegal gem hunting. It is Moon that recognises the gemstone that Wafer has found as a valuable corundum and he wants to know where he found it. Wafer can neither remember nor does he even care. However, the rest of the townsfolk, who want to revive the town, a former successful mining town, are determined that Wafer should show them where he found it. The story is narrated by a wayward young woman, Gabby Jerrold, and we know from very early on in the book that this is not going to turn out well. Astley gives us a first-class novel on the outsider vs the community theme.