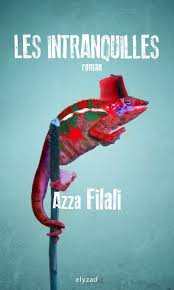 The latest addition to my website is Azza Filali‘s Les intranquilles [Uncertain Times]. While not a great novel by any means, it is certainly a fascinating portrait of Tunisia after the Revolution, showing that the revolution has essentially failed and replaced one lot of crooks/oppressors by another lot. We follow a small number of Tunisians who are caught up in the events during and immediately after the revolution. With the exception of the prostitute with the heart of gold, most of the other characters are in some way compromised, either by being associated with the old regime, by being outright crooks or being Islamists, wishing to make Tunisia a strict Muslim country under sharia law. We follow the main characters in a bank – the CEO, the personnel director and chief accountant – who have been pillaging the bank for their own benefit and now have to pay the bills. We also meet the daughter of the personnel director who, initially, is in favour of the revolution but becomes disillusioned, an Islamist who has been in prison for fifteen years just prior to the revolution, but seems to be no happier outside prison and an old phosphate miner who is compromised by having been associated with the people in power under the old regime. It is not a happy picture and shows a sad state of affairs in Tunisia, with the revolution having achieved little for the benefit of the Tunisian people.