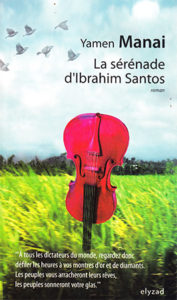 The latest addition to my website is Yamen Manai‘s La Sérénade d’Ibrahim Santos [The Serenade of Ibrahim Santos]. Though a Tunisian novel with clear references to the political situation in Tunisia (the book was written just before the Tunisian Jasmine Revolution of 2011), the book is actually set on a fictitious Spanish-speaking Caribbean island. Santa Clara is a remote village on the island. The inhabitants make a very good rum. The President-General of the (unnamed) country tastes the rum and then tries to find out where it came from. Santa Clara is on no map and no-one has heard of it. The army is sent to find it and, eventually, a troop does find it. To their horror the streets are named after General Burgos, who was overthrown twenty years previously. The troops educate the inhabitants but have to sing the new national anthem so that Ibrahim Santos, the town band leader and weather forecaster, can transcribe it. But then the Minister of Agriculture decides to send Joaquín Calderón, top of the class in agricultural engineering in the whole country, to teach the ignorant inhabitants how to improve their output. Not surprisingly this does not meet with the approval of the inhabitants and the inevitable dispute happens. As this is (sort of) based on what happened or, rather, what Manai would have liked to happen, violence ensures. Manai tells his story well, a mocking satire damning those in authority and proclaiming freedom for his people.

The latest addition to my website is Azza Filali‘s Les intranquilles [Uncertain Times]. While not a great novel by any means, it is certainly a fascinating portrait of Tunisia after the Revolution, showing that the revolution has essentially failed and replaced one lot of crooks/oppressors by another lot. We follow a small number of Tunisians who are caught up in the events during and immediately after the revolution. With the exception of the prostitute with the heart of gold, most of the other characters are in some way compromised, either by being associated with the old regime, by being outright crooks or being Islamists, wishing to make Tunisia a strict Muslim country under sharia law. We follow the main characters in a bank – the CEO, the personnel director and chief accountant – who have been pillaging the bank for their own benefit and now have to pay the bills. We also meet the daughter of the personnel director who, initially, is in favour of the revolution but becomes disillusioned, an Islamist who has been in prison for fifteen years just prior to the revolution, but seems to be no happier outside prison and an old phosphate miner who is compromised by having been associated with the people in power under the old regime. It is not a happy picture and shows a sad state of affairs in Tunisia, with the revolution having achieved little for the benefit of the Tunisian people. 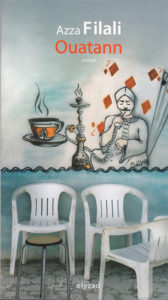 The latest addition to my website is Azza Filali‘s Outann [Outann]. This is a Tunisian novel set shortly before the Tunisian Revolution and showing a country ripe for change. Virtually all the characters in the book are miserable. Many of them are engaged in dubious, usually criminal activities. Many of them are divorced or heading that way. The heroine is Michkat, a woman lawyer, who works for a corrupt and rich lawyer. When they argue over a divorce he has asked her to take on – his own – she loses her temper and walks out on him. As he is the head of the Tunis lawyers’ association, she is unable to find another job. Meanwhile we meet Rached, also a lawyer, who hates his job, his wife and his life. He meets an old school friend, Mansour, who offers him a very well paid job. He accepts and his task is to find a suitable temporary rented house in a village near Bizerte. The one he does find is not available for rent and is owned by Michkat’s father. However, the caretaker is prepared to rent it illegally as Michkat’s father never visits and Michkat only comes occasionally. The house turns out to be a temporary refuge for a man, Naceur, who has been engaged in criminal activities and is to be smuggled out of the country on a false passport and Schengen visa. Michkat does turn up and recognises both Mansour and Naceur from her time as a criminal lawyer. Inevitably things go wrong. Filali, however, is more interested in showing her country and its sad state, with corruption rife, the poor getting poorer (virtually the only activity in the village near Bizerte is smuggling, both of goods and people) and everyone thoroughly miserable. The country is ripe for revolution but we know how well that went. 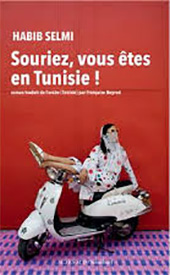 The latest addition to my website is Habib Selmi‘s نساء البساتين (Souriez, vous êtes en Tunisie !) [Smile, You Are In Tunisia]. The novel is narrated by Taoufik, a Tunisian who has married a French woman and now lives in France. He has come back to visit Tunisia, which he has not visited for five years. He is surprised by how much has changed. He is staying with his brother, Ibrahim. His first surprise is that Ibrahim’s wife, Yousra, is wearing a veil and will not kiss him but only shake hands. He finds that a religious fervour has swept through the country, with virtually all men going to the mosque for Friday prayers – his young nephew, Wael is particularly enthusiastic. However, he also finds a strong element of hypocrisy. Yousra is happy to wear sexy clothing and make-up. Some of them preaching sanctity are also having extramarital relationships. Taoufik’s older brother, Bashir, who is planning on doing the hajj to Mecca the following year, is cheating on his taxes. However, Taoufik clearly no longer fits in. Several characters ask him what nationality he is and are surprised to find that he is Tunisian. Several people also ask him to help them get to France. This is not a great book but it is interesting to read about Tunisia, the changes it has undergone and how it is just before the Arab Spring. 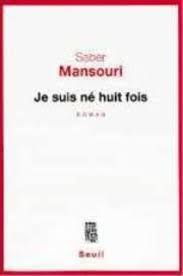 The latest addition to my website is Saber Mansouri‘s Je suis né huit fois [I Was Born Eight Times], a Tunisian novel published last year. Sadly, it is not about the Tunisian Arab Spring, as it is set entirely in the last century, though there is a certain amount of satire on and criticism of corruption and dirty dealings in the Ben Ali administration. Mostly, it is about Massyre, the youngest of eight (he has seven older sisters). Massyre has to work various jobs to help the struggling family (his father lost his job when his public corporation was privatised to the benefit of the rich). We get a detailed account of these various jobs, including goat herding, collecting and selling rare snails, which are a delicacy, selling newspaper for wrapping paper and selling used clothes. But Massyre is intelligent and he is able to go to school, where he does well, except in maths and with the opposite sex. He manages to go onto university and become a teacher himself, teaching history and geography but his love life again goes awry. It is not a bad novel, even if Mansouri too often gets carried away in his descriptions and it certainly mocks and criticises the Tunisian government, but only mildly. It has not been translated into English and, frankly, I do not think that it will be.