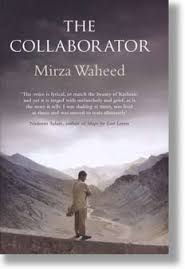 The latest addition to my website is Mirza Waheed‘s The Collaborator. This is the first novel on my site from Kashmir. This novel is set in the India-Kashmir conflict and tells the story of a teenage boy who, unlike the other boys in the village, does not go off and join the freedom fighters but stays behind in the village. At the start of the novel, the village has been completely abandoned, except for the narrator and his parents. The narrator is working for the local Indian army captain. His job is to go into the valley, which used to be beautiful and where he and his friends played but is now the place where the freedom fighters try to infiltrate Indian from Pakistan and where they are, for the most part, mown down by the Indian army and their corpses left. In the valley, he has to take the IDs and weapons from the corpses and give them to the Indian army captain. The novel tells of how the village was before the conflict, before the villagers left and how he deals with the Indian army captain. Though there is not much plot, the novel certainly gives an interesting portrait of a village at the front line of conflict.