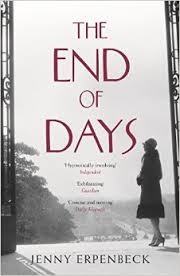 The latest addition to my website is Jenny Erpenbeck‘s Aller Tage Abend (The End of Days). This is a non-whimsical variation on a technique we have seen in Kate Atkinson‘s Life After Life. In this case, the heroine, who is only named at the end and then only with her married name, Frau Hoffmann, dies four times, before her final death shortly after her ninetieth birthday. In each case, we are told what happened had she died but we are then given a series of logical scenarios in which her life could have been spared. Erpenbeck picks one of these and Frau Hoffmann’s life carries on. Not only does she have these events (unlike in the Atkinson book, she is completely unaware of the alternative scenarios), she lives through troubled times. She is born in Galicia, then part of the Austro-Hungarian Empire but now part of Poland, of a Jewish mother, whose family had been the victims of anti-Semitic attacks, and a non-Jewish father. She lives through Vienna during and after World War I, with major food shortages, emigrates to the Soviet Union when Hitler takes power and returns to East Germany after the War, living through the fall of the Berlin Wall. As a communist with a Jewish background, her life is not easy. Erpenbeck tells a very serious story well, focussing on the randomness of life but also its harshness.