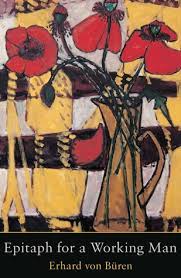 The latest addition to my website is Erhard von Büren‘s Abdankung. Ein Bericht (Epitaph for a Working Man). Von Büren wrote this, his first novel, when he was nearly fifty. It is the affectionate portrait of an ordinary, hard-working Swiss stonemason, in the last year of his life. Alois Haller has worked all his life. He is now living in an old people’s home but is determined to carry on working and carry on in his independent ways. When he get a growth on his back, the local doctor removes it but does not have it checked. When it reappears and he has to go to hospital, it is soon realised that it is cancerous. We follow the development of his illness and his treatment, up to his death, about which we learn from the very beginning of the book. All the while, Alois remains fiercely independent, fiercely critical of the doctors and the home and determined to carry on working and being his own man, which includes drinking and smoking. Much of this we see through the eyes of his son, who is quite different from his father. He is an out-of-work typesetter, who is married to Sophie (they have no children). She is having an affair with her boss and her husband is well aware of this and seemingly not too bothered about it. Indeed, he does not seem bothered about anything, half-heartedly looking (unsuccessfully) for work. Von Büren clearly has a strong feeling for Alois Haller, an ordinary but very independent man.