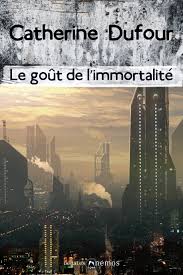 English PEN’s PEn Presents Initiative has had the excellent idea of presenting a list of six books, which are all very worthy but have not been translated into English (yet). The six are Ilva Fabiani, an Italian novelist, Kristien Dieltiens, a Belgian young adult novelist, Antonio Orejudo, a Spanish novelist, Ulrike Almut Sandig, a German poet, Ahmet Yorulmaz, a Turkish novelist and Catherine Dufour, a French science fiction and fantasy writer (see cover of her best-known book to the left). I was familiar with Orejudo, whose Reconstrucción I plan to get to some time and Dufour, who has made something of a stir, though I don’t expect to read her but was not familiar with the other four. I shall certainly look out for Fabiani. It is good to see six untranslated novelists appearing sometime soon in English.