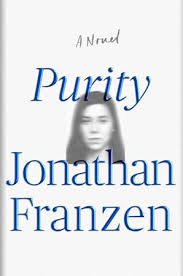 The latest addition to my website is Jonathan Franzen‘s Purity. Inevitably, this book has caused much controversy and has been condemned for being sexist (which it partially is but no more than thousands of other novels), problematic, self-indulgent and probably all sorts of other crimes. Ignore the buzz and read the book. It is not a great novel but it certainly is a novel worth reading, with an interesting plot and lots of idea, ranging from the nature of the Internet to implied incest, from the value of money to the role of journalism. The focus is Pip Tyler (whose real name is Purity but, naturally, she tries to keep that hidden). She is the only child of a single mother, Penelope, who works as a check-out clerk in a supermarket and lives in a trailer. Penelope has changed her name (and Pip’s name) to escape Pip’s father and resolutely refuses, despite Pip’s best efforts, to reveal the identity of Pip’s father. Pip has, of course, tried to track him down on the Internet, to no avail. Obviously, this is going to be a feature of this story. Pip has a lousy job selling dubious renewal energy products, a huge student loan debt and no boyfriend. She lives on a sort of commune and is in love with Stephen, who loves only his wife, even when she leaves him.

At the commune she meets a German woman, Annagret, who puts her in touch with Andreas Wolf, a Julian Assange-type figure (but not Assange, who is condemned by Wolf and others) and his Sunlight Project (not Wikileaks but similar). Pip is persuaded to join the Sunlight Project but then moves to Denver to work for an investigative journalism project (we only learn why later in the book) where she is involved in investigating a missing nuclear warhead and becomes close to the head of the project, Tom Aberant (sic). Much of the book is about the back stories of Wolf and Aberant, as well as about Pip’s involvement with them. At times I felt that Franzen went into too much detail, particularly with Aberant’s story but, on the whole, he tells a good story and raises a host of interesting ideas. A book worth reading but certainly not the Great American Novel.