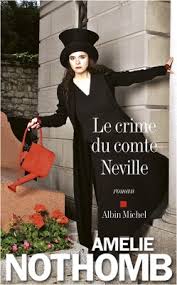 The latest addition to my website is Amélie Nothomb‘s Le crime du comte Neville [The Crime of Count Neville]. This is her twenty-fourth book in twenty-four years. She regularly produces a novel during the French rentrée and this one is this year’s offering. It will doubtlessly appear in English ere long. It is something of a change in approach for Nothomb in that it is a fable. It is set in the Belgian Ardennes and tells the story of the aristocratic Nevilles. (Nothomb herself is descended from Belgian aristocrats.) Henri and his beautiful and twenty-year younger wife, Alexandra, have three children. Orestes and Electra, in their twenties, are the perfect children. Sérieuse, aged seventeen, is sullen, morose and solitary. One night, Sérieuse is out wandering in the forest after midnight when she is spotted and taken in by the local clairvoyant. When Henri picks her up, the clairvoyant forecasts that he will hold a sumptuous party (which he knows, as he does so every year) and at this party, he will kill someone. Henri, who prides himself on being the perfect host, is very perturbed by this. He particularly wants to give a good party this year, as it will be the last. The Nevilles are completely broke and will have to sell the château. While he considers whom he might kill of the guests, Sérieuse makes him a proposition. He should kill her, as she is fed up with life and wants to die. It is a fairly simple fable, but, as ever with Nothomb, light-hearted, well-told and humorous.