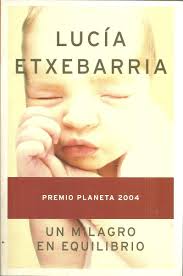 The latest addition to my website is Lucia Etxebarría‘s Un milagro en equilibrio [A Miracle in the Balance]. This tells the story of Eva Agulló, a Spanish woman who, early in the novel, has given birth to a baby, Amanda, and recounts her life to that date. When young she had done lots of sex, lots of drugs and lots of alcohol. She had wanted to be a writer but her three novels had not been published. She had written various articles and columns, before being asked to write a book on drug addiction in a series on issues facing modern women in Spain. The book was a considerable success, but things went wrong when she was photographed by a scandal magazine, with an old schoolfriend, now a successful soap opera star, with the magazine implying that the two were having an affair (he was married) and doing drugs. She spent some time in the US, before meeting Anton, a Romanian who became her partner and father of her child. Much of the book is in the form of a letter to Amanda, telling the baby about Eva’s life, how she is coping (and not coping) with motherhood, the issues surrounding pregnancy and motherhood and, later on, the issues surrounding her own mother, who is now dying from pancreatitis. It is a bit long-winded at times but shows a Spanish woman who seems no better off at dealing with life than her mother and grandmother before her.