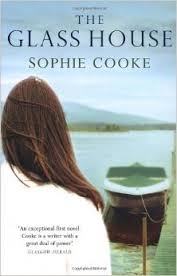 The latest addition to my website is Sophie Cooke‘s The Glass House. She did not make the Granta Best Young British Novelists list but I think that she should have done, as this novel is definitely better than some of the ones I read by those who did make the list. This novel tells the story of the Gordon family. Mary, the mother, is living with her three daughters, Lucy, Vanessa and Bryony. Mary’s husband is an engineer, working in Saudi Arabia and his visits home are spasmodic. The novel is told from the point of view of Vanessa who, at the start of the novel, is fourteen. Vanessa has just been expelled from her boarding school (her two sisters remain there) and has now got to go to the local school. She does not like it, not least because she is teased for being too posh. However, she does get to know Alan better, whom she had had known for some time but lost touch with, and they start a relationship. At the same time, her mother starts an affair with a family friend, married with two sons. Mary has already shown signs of psychological instability. She loses her temper and severely beats Vanessa on several occasions. When Vanessa’s and Mary’s relationships both go wrong, both drift into a form of depression, as does Bryony. Only Lucy remains more or stable. We follow the three as things gradually – but only gradually – get worse. Vanessa makes a mess of her school-leaving exams and Mary attempts suicide. Cooke gives us an excellent portrait of a dysfunctional family which is slowly failing to deal with its psychological problems, even though, from the outside, they look relatively normal.