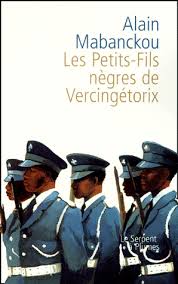 The latest addition to my website is Alain Mabanckou‘s Les Petits-fils nègres de Vercingétorix [The Negro Grandsons of Vercingetorix]. I found this novel somewhat disappointing, as it is a bit disjointed and seems to be telling one story but never manages to get on with it. It is about the civil war and its effect in the Republic of the Congo, thinly disguised in this book as Vietongo. We follow two couples – Hortense (who has nominally written her story which this novel is) and her husband Kimbembé, and Christiane and Gaston. The problem is, is that Hortense and Gaston are from the north and their spouses from the South but both couples are living in the South. This causes all sorts of problems as the current Northern president, Edou, is from the North but has seized power and is very much resented by the people of the South, including the guerrilla group, Les Petits-fils nègres de Vercingétorix [The Negro Grandsons of Vercingetorix], led by the former prime minister, named after a Gaulish leader who opposed Julius Caesar. With Kimbembé very much involved with the Petits-fils, Hortense decides to flee with their daughter, Marimbé, but their story more or less peters out, as Mabanckou/Hortense focuses on the back stories of the key participants and the political background to the civil war. This is one of the few of Mabanckou’s novels that has not been translated into English and I can more or less see why.