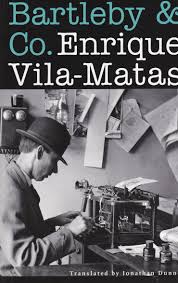 The latest addition to my website is Enrique Vila-Matas‘ Bartleby y compañía (Bartleby & Co.). This is perhaps more literary criticism than a novel. It is narrated by a man called Marcelo who wrote a novel twenty-five years ago and has not written anything since. His new work is to be about writers he calls bartlebys (from Herman Melville’s Bartleby the Scrivener, about a copyist in a legal office, who gradually stops working and, indeed, stops doing anything, including living.) Marcelo’s bartlebys are writers who have not published or even written any work or who have, like him, written only one or two works and then given up writing. We get descriptions of a whole host of writers, some fairly well-known (Rimbaud, Salinger), some less well-known, some completely unknown and some completely fictitious, all of whom are deemed to be bartlebys, often in different ways. It could be boring but Vila-Matas tells the stories of each individual in such a way that it adds up to a collection of fascinating stories with added bonus that it is all about literature and how it is written and, of course, how (and why) it is not written. I had not heard of many of the writers and, I imagine, few people, particularly those from the English-speaking world, will have heard of many of them. The book has been translated into English and I can thoroughly recommend it as a most interesting read.